Founded by William S. Macfadden (a.k.a. Ol’Bill), Eagle Mount Great Falls is a non-profit organization that has been serving Great Falls, MT and surrounding communities since November of 1990. We offer exciting programs that allow individuals of all ages with challenges (who we call our “participants”) to explore recreation and take on new adventures based on their abilities, not their disabilities. Parents can watch their children grow socially, emotionally, and physically and are given an opportunity to develop a personal support network with each other.

Businesses and individuals provide their support through the use of their facilities, equipment and donations. Eagle Mount Great Falls is truly blessed by local support!

Bill Macfadden (December 15, 1928 – October 20, 2017) was born and educated in Minneapolis. He graduated from Dartmouth College. Bill migrated to Montana in March of 1955, by birth he is not a native but he got here as fast as he could. “When I was in high school, I worked for a lumber company in Idaho in the summer,” said Bill. “Then the next summer, I worked in a logging camp in Montana not far from Forest Green. So from then on, I figured that whatever I do in life, I am doing it in Montana and I have never looked back.”

Bill was a man of many talents and skills. His wonderful smile and the twinkle in his eyes let you know there was a mischievous side to him. He had a great sense of humor and quick wit always ready to tell a great story or funny joke. It seems that most everyone in town knew Ol’ Bill.

Bill served in the United States Marine Corp where he was awarded the Distinguished Flying Cross for heroism and extraordinary achievement while participating in aerial flight, in action against enemy forces in Korea.

Bill began his career with D.A. Davidson in March of 1960 and retired on November 1, 1990. Bill was a man of many firsts. In 1981, he became the first president of Financial Aims. He was the first manager of D. A. Davidson’s Syndicate Department; he designed and initiated the training program for D. A. Davidson Investment Executives. He was the first (almost native) Montanan on the Chicago Board Options Exchange and a member of the Midwest Stock Exchange and the Chicago Board of Trade. He was appointed in 1990 to serve on the Montana State Board of Investments.

Bill balanced a demanding professional career with family, church and community involvement including serving on several boards. On the day Bill retired from D.A. Davidson in 1990 he started Eagle Mount Great Falls.

Bill definitely enjoyed life to the fullest. When he first came to Great Falls he played hockey for the Great Falls Americans. He had many other enjoyments such as; fishing, hunting, skiing, rafting, and playing cards. Bill and his wife, Joan-Nell, have three daughters and seven grandchildren. Together they have made a tremendous impact on people’s lives in our community and beyond.

Bill was and always will be the driving force in making Eagle Mount Great Falls what it is today. He was a true believer in team work and always said “there is no I in team”. Bill has created a legacy within Eagle Mount Great Falls that promotes teamwork, acceptance, adventure, new abilities and friendship. We are very proud and we welcome you to become part of this extraordinary team that will take Bill’s legacy into the future. 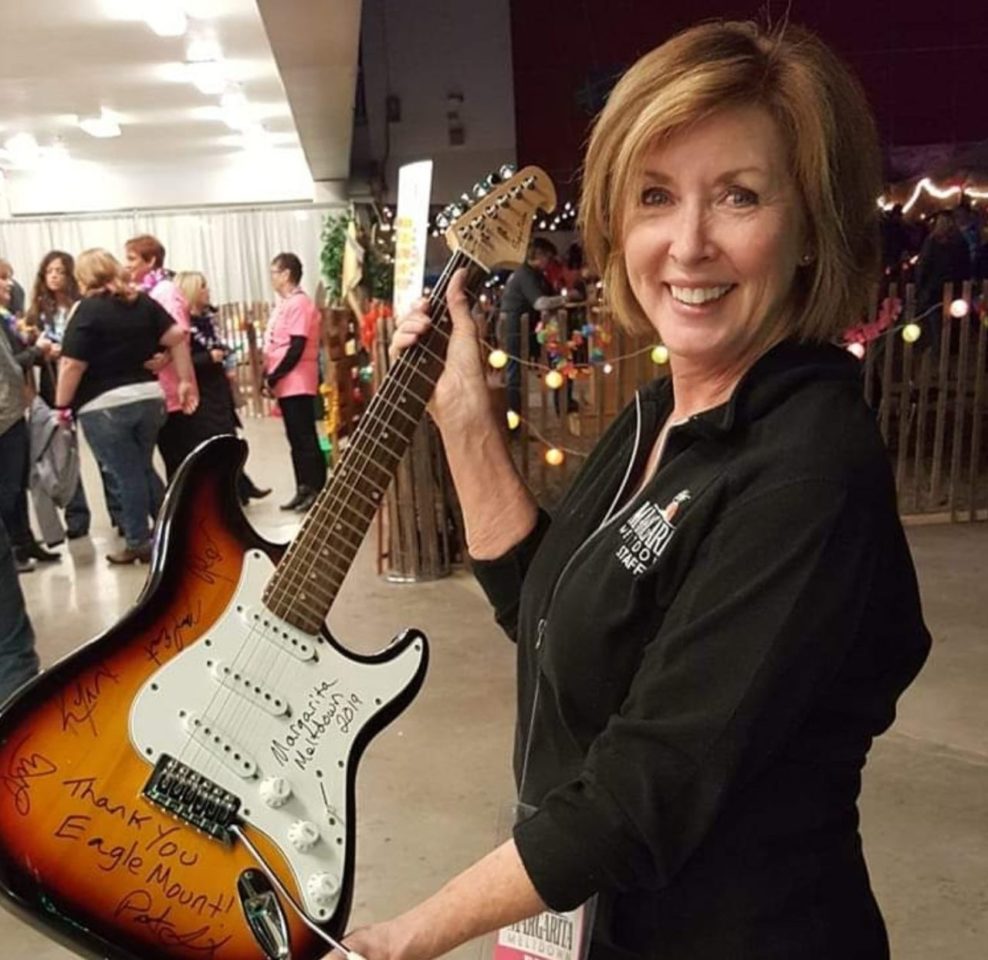 Deb came to Eagle Mount Great Falls in May of 2000. Deb oversees all it's functions. She has an extensive background in television advertising, marketing, public relations and public speaking. Deb has served on the board of directors of the Great Falls Advertising Federation and was named the 2001/02 President of this organization. She has also been active with the Chamber of Commerce and served on the Agriculture committee. Her exemplary community service also includes serving as the President of the Miss Rodeo Montana advisory board from 1998-2001. Through Deb's many contacts, public speaking engagements to area businesses and organizations within the Great Falls area, she is working on establishing partnerships with Eagle Mount and local businesses as well as creating a better community awareness of what Eagle Mount programs provide for people with disabilities. 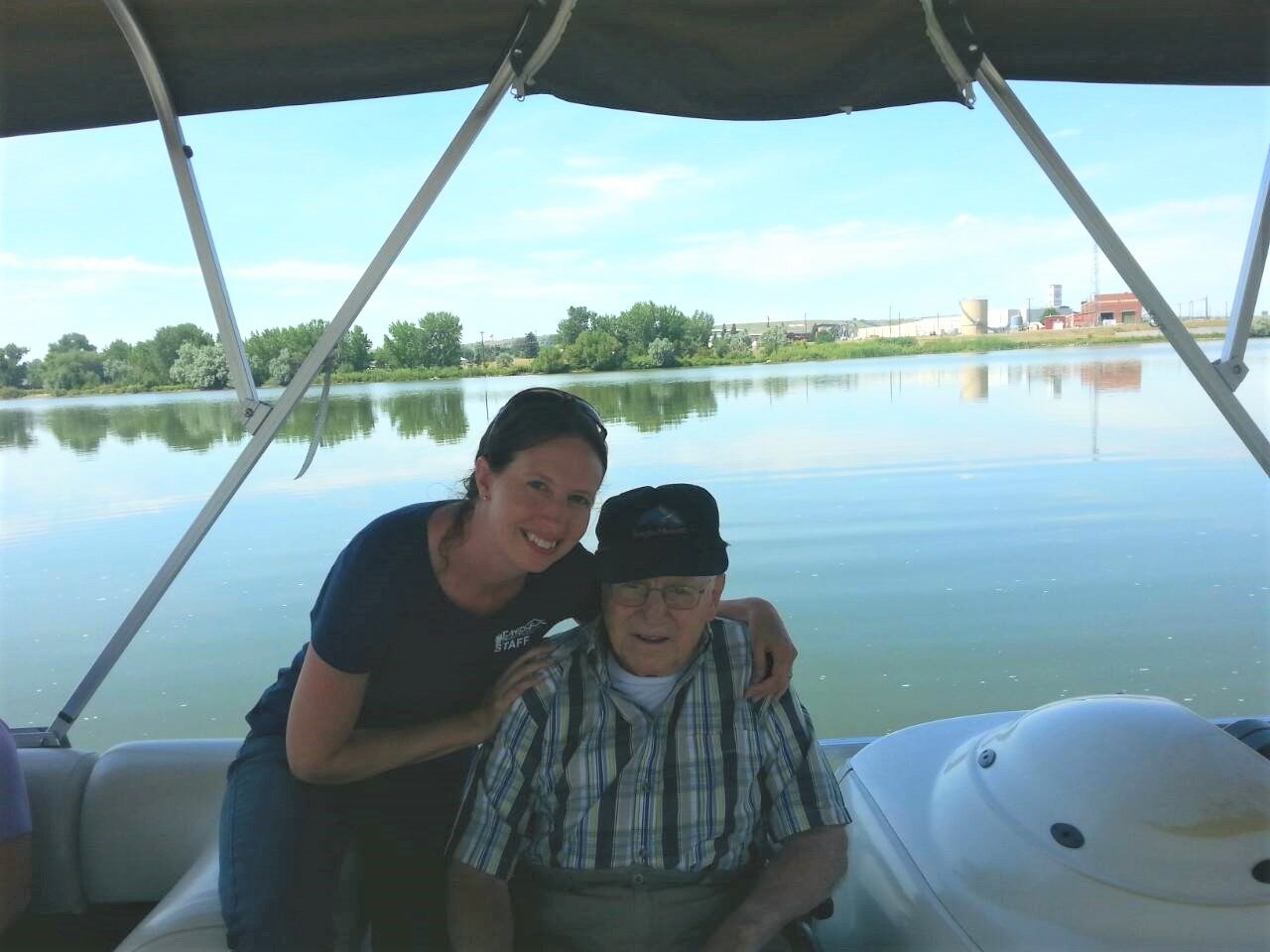 Born and raised in Great Falls, MT and with a background as a Certified Medical Assistant, Heather joined the Eagle Mount Great Falls team in July of 1994.

Since then she has expanded her role into Operations Director which involves all operating and programming areas of Eagle Mount Great Falls – running and developing programs, fundraising, accounting, participant and volunteer recruitment and management, human resources, community outreach, as well as maintaining the daily operations.

When Heather is not in the office you can find her driving the pontoon boat, rooting on our high roller bowlers, maintaining the equestrian center, feeding and caring for the horses and other animals, rowing rafts, helping with summer activities, assisting with fundraising, and basically being wherever she is needed to make our programs run and organization grow.

"My years here at Eagle Mount have been some of the most rewarding years of my life. My training as a Certified Medical Assistant helped me smoothly integrate into the Eagle Mount family in understanding and working with our participants and their families. Working with our participants, seeing them smile and witnessing their accomplishments is beyond amazing to be a part of. I am truly blessed to be a part of such an amazing organization and I look forward to seeing Eagle Mount continue to grow in the Great Falls community. Eagle Mount is and always will be one of my favorite places to work and play!” 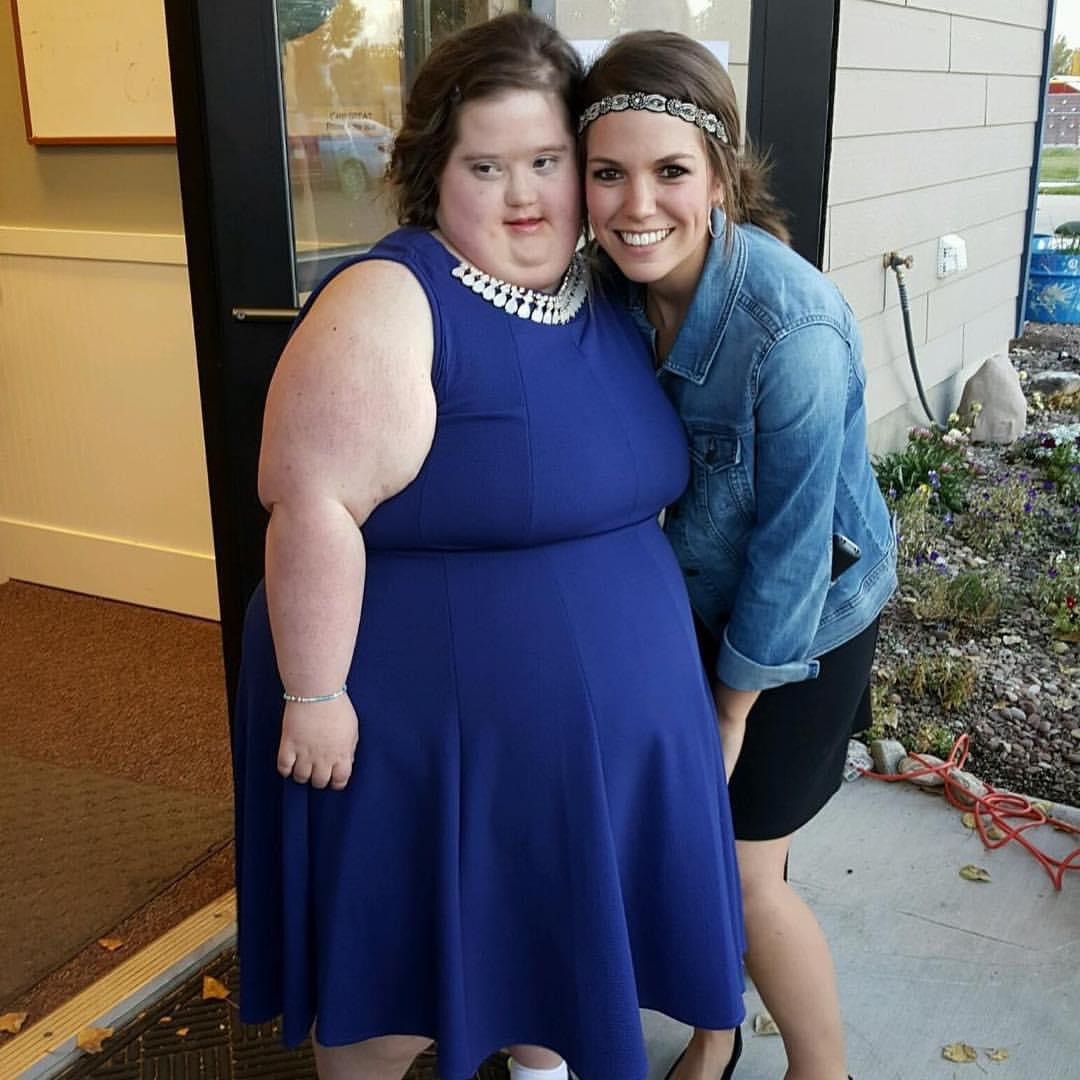 Born and raised in Great Falls, Ronni first came to Eagle Mount Great Falls as a volunteer in 2009. She later joined the permanent staff in 2011. Ronni was introduced to Eagle Mount early in her life, as her grandfather, Dick Dailey, helped to create our skiing program. Ronni has a bachelors degree in Liberal Arts with a focus in non-profit leadership.

In her time with us, she has played a variety of roles in our organization. Whether it's putting on summer activities, accounting or organizing and planning other programs, Ronni most looks forward to the smiles on our participants faces. She truly values the relationships and bonds that have formed with the participants over the years and she is eager to continue to watch them defy the odds. 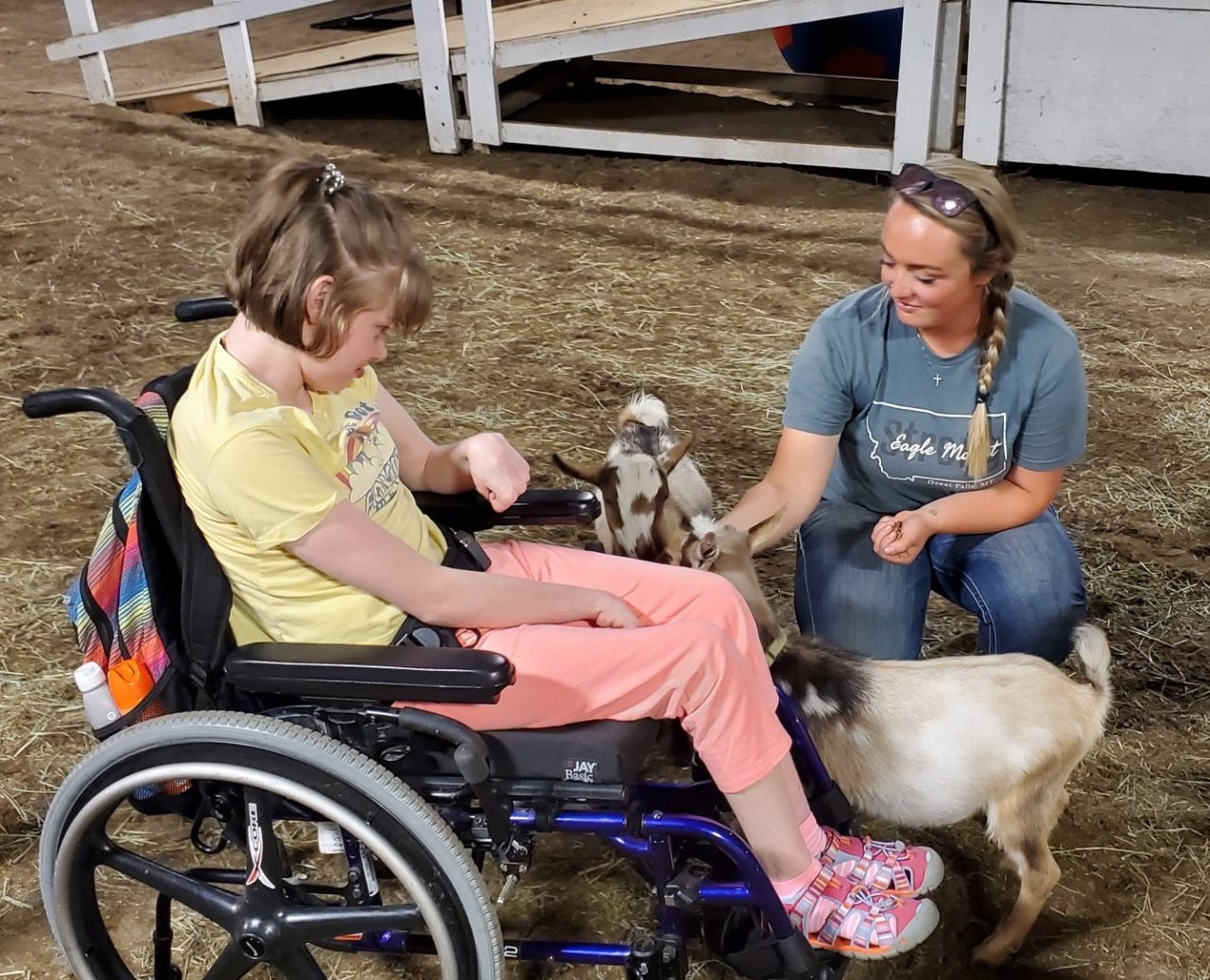 Specializing in Small Animal Programming and Other Adventures!

Shelby was born and raised outside of Seattle, WA. From a very young age, she’s always had a love for animals. Every year she spent part of her summers learning how to ride and care for horses as well as other farm animals. As a junior in high school, Shelby found a passion for peer education- a program her school offered that allowed students the opportunity to assist special education teachers with their students. She particularly found great joy in helping during the P.E. class.

“I became close with one of the students. He was very shy and lacked the confidence to make friends. Isolation led to a rapid weight gain which led to an even lower confidence level. While in P.E., I was able to give him the one on one time that our teacher couldn’t offer him. Each week we set new goals and each week we accomplished them! By the end of the semester, we were able to run a mile and we had reached every goal we had set. It was such a rewarding feeling to see that you helped someone boost their confidence through physical activity.”

After graduating high school, Shelby packed her bags and went on to pursue a degree in Kinesiology at MSU Bozeman. While in school, she began working at Bozeman Health in Surgical Services. It only took her a few months to realize that working in a hospital setting was not something she enjoyed. Shelby changed her degree to Community Health and also added a minor in Human Development. Once Shelby graduated from MSU, she began interning with Eagle Mount Great Falls which led to a position in August of 2020. For Shelby, working at Eagle Mount is the perfect combination of her biggest passions- animals and helping people through therapeutic recreation. 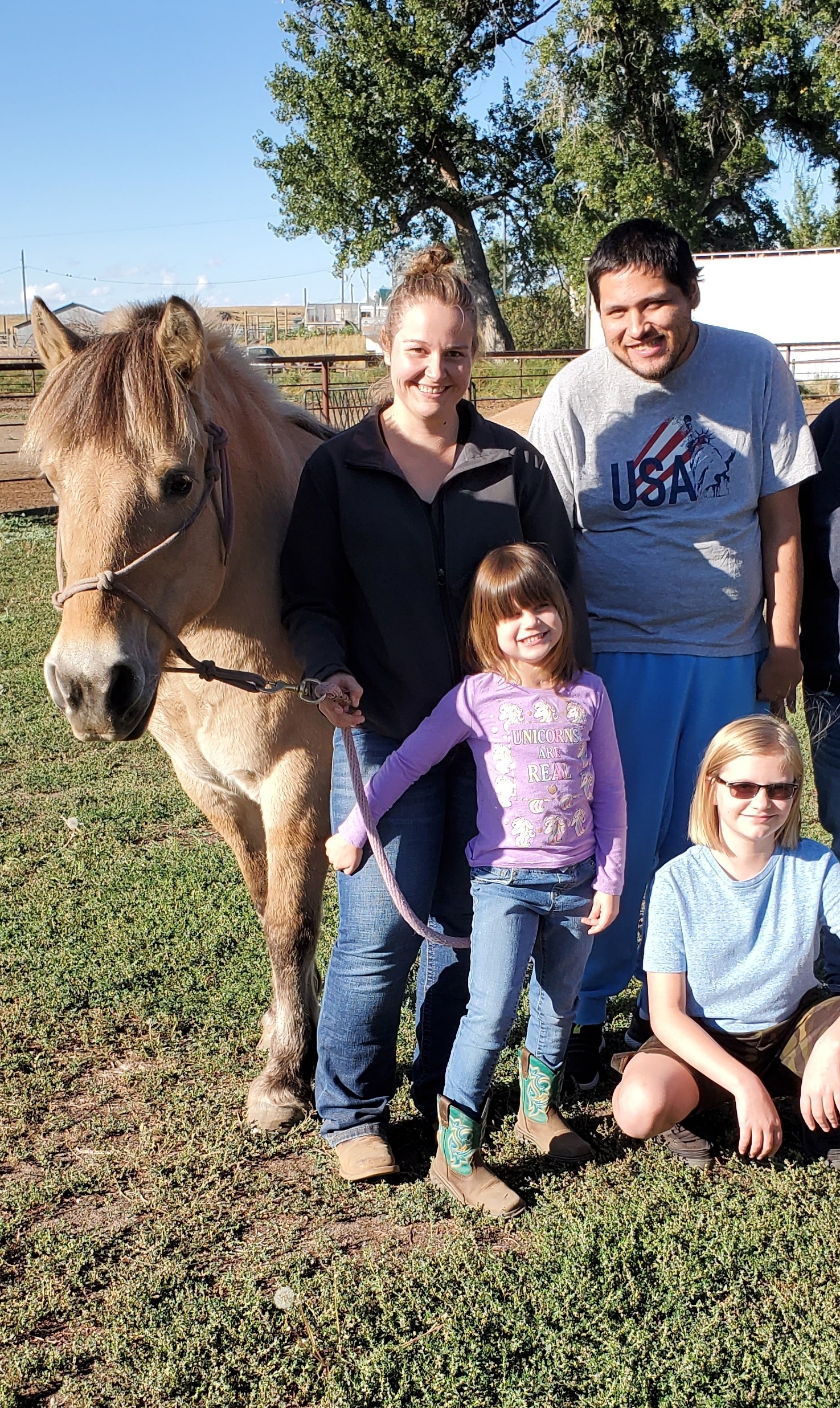 Morgan was born and raised in Northern California in the town of Redding. Since a young girl, horses have always been a passion of Morgan's, which is something that has never wavered. She has been riding for 19+ years and training under well-established trainers, and competing in both Dressage and Eventing. Horses have shaped Morgan into the person she is today. She knew that working with horses and helping individuals was something she truly wanted to do. That was when she began to learn more about therapeutic riding through attending College at the University of Montana Western, where she studied Business Management and Equine Studies and graduated in 2018.

In August of 2019, Morgan attended the eight-week Instructor in Training Course located at Equest in Dallas, Texas and became a PATH Certified Therapeutic Riding Instructor (CTRI). Throughout her time at Equest, she spent many hours in the classroom learning as well as being able to apply her skills firsthand in the arena teaching under a mentor. This program dived deep into all aspects of Therapeutic Riding and covered topics such as human anatomy and kinesiology, human psychology, teaching methodology, disabilities, mounting techniques, adaptive equipment, volunteer recruitment and management, leadership programming and practical teaching experience. Throughout this program, Morgan excelled greatly and loved every minute of it, reconfirming this is truly something she wanted to be a part of.

Morgan is excited for her journey of working at Eagle Mount Great Falls and making a difference for others.

Meet Our Board of Directors

Eagle Mount provides expert programming with the help of: The first Eagle Mount was founded in Bozeman, MT in 1982 by Bob & Greta Mathis. Today, Montana cities Bozeman, Billings, and Great Falls all have independent Eagle Mount organizations. Although independent of each other, we all share a common purpose – to create unparalleled therapeutic recreational opportunities for people of all ages and disabilities.

"...to provide therapeutic and recreational activities for children and adults with physical, developmental, behavioral and/or mental challenges, striving to improve the quality of life for them and their families."